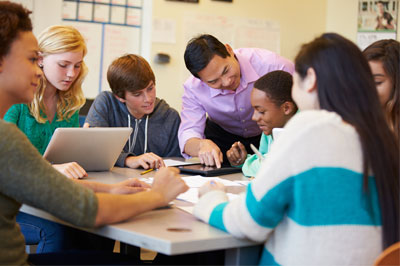 Since officially opening in 1969, Sir Frederick Banting Secondary School has fostered student success through a positive community environment. Located in north-west London at 125 Sherwood Forest Square, the school is named after Sir Frederick Banting, a Canadian scientist who won a Nobel Prize for inventing insulin.

This exceptional high school prides itself on its long-standing tradition and excellence in the academic world, as well as in arts and sports programs and community service. The school’s athletic programs include the Banting Hockey Academy Program and Aquatics Gym and Dance. Arts programs include instrumental varieties and vocal opportunities. Further, the faculty offers many awards for graduates ranging from medals to cash awards to go toward post-secondary schooling. The non-profit Fraser Institute gave the school a 6.6 out of 10 rating, placing the school at 245th out of 623 schools.

Sir Frederick Banting Secondary School provides a sophisticated and highly sought-after French Immersion program and a highly regarded program for students with developmental disabilities. The school strives for inclusion and belonging for all, making it one of the top schools in the London area. It’s no surprise as to why the Sir Frederick Banting London Ontario Real Estate is desirable for many families.

When searching for prime Sir Frederick Banting London Ontario Real Estate, it is important to consider the boundaries of the school. The borders extend just past Sunningdale Road West to the north, just before Denfield Road to the west, down toward the Thames River in the south, and along the North Thames River to the east. School boundaries are subject to change on a year-to-year basis. For further boundary information, check in with the Thames Valley District School Board. 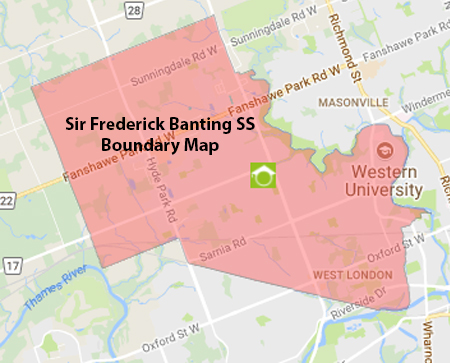 Real estate in the community features older homes with fair sized lots in University Heights, as well as newly developed neighbourhoods in the outlying and surrounding areas. Many of the lots consist of single-family detached homes. For more information regarding Sir Frederick Banting London Ontario Real Estate, call or text us at 519-851-2844. Schedule a showing or consult with one of our expert team members today.

Not seeing a home that meets your needs?

View all the Homes Near Sir Frederick Banting Secondary School >>>

Welcome to 1266 journey cross this beautiful full stucco brick home comes with over 100k upgardes with lot of parking. this modern 4 bedroom, open concept with 9' ceili...

TO BE BUILT: Rockmount Homes 2,095 square feet of beautifully finished living space and striking curb appeal! The exterior is finished with stone, stucco and vinyl siding...

TO BE BUILT: Rockmount Homes 2,095 square feet of beautifully finished living space and striking curb appeal! The exterior is finished with stone, stucco and vinyl siding...

Welcome to Unit 1013 at 1030 Coronation Drive in the Northcliff Building in Hyde Park built in 2010. This south facing 1,266 square foot condo is sure to impress with the...

Looking for the perfect place to call home? You've found it! This immaculately maintained and exceptionally cared for 1 floor condo, single car garage has it all. Upon e...

The data relating to real estate on this web site comes in part from the Internet Data Exchange (IDX) program of the London and St. Thomas Association of REALTORS®. The information herein is believed to be accurate and timely, but no warranty as such is expressed or implied.The trademarks MLS®, Multiple Listing Service® and the associated logos are owned by The Canadian Real Estate Association (CREA) and identify the quality of services provided by real estate professionals who are members of CREA. Used under license.Trademarks owned or controlled by The Canadian Real Estate Association. Used under license.

The information provided herein must only be used by consumers that have a bona fide interest in the purchase, sale, or lease of real estate and may not be used for any commercial purpose or any other purpose.

Popular Areas in the Community

Looking for the perfect home in the perfect place? Chances are you'll want to check here first.